What is Different About Hotel Door Lock System and What Makes Them so Unique? What is Different About Hotel Door Lock System and What Makes Them so Unique?

Hotel door lock system has traditionally been selected during the construction phase of the hotel in Malaysia. The reason for this is that the doors need to be ordered and prepped for the particular hotel door locks well in advance of the opening of the hotel. Especially for new builds, many times the decision on which hotel door lock system and hotel lock are chosen is made by the owner/developer and design/construction team. Most of the time the operational personnel who typically use the system (such as front desk, housekeeping, engineering, security and IT) are only brought on board closer to the opening of the hotel. As such, the input from these departments is not factored into the overall hotel lock system selection process.

The other way that hotel door lock systems are usually installed is during a time of a refresh or room upgrade. Due to the cost of the hotel door lock system, it is usually incorporated as part of an overall renovation. Again, the design team usually has a heavy hand on the overall decision making, and in most cases aesthetics and cost usually win over functionality and proposed security. However, there is the potential for operational, security and IT input into the overall decision making if the ownership group involves the property itself in the project.

A major factor involved in the decision of which hotel door lock system to purchase is often influenced by how long the owner intends to keep the property. If they intend to sell the property in the next few years, they may opt to install a less expensive hotel lock system. If they intend to keep the hotel for the long term, they may be convinced to install a quality system that will last for a long time. 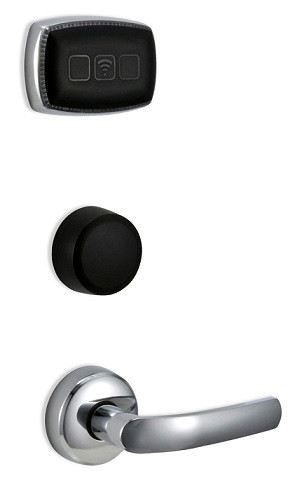 Besides, in the past, the primary concern was the interface to the PMS. However, Adel hotel door lock system can also be linked to energy management and room automation systems, among others. As such, their ability to integrate, and in some cases share networks, can be reasons for the selection of a particular system.

Hotel door locks should meet the fire rating code requirements. In most instances the doors need to be fire rated and the hotel door locks may impact the rating to the door. If the hotel locks contain plastic components, the question arises as to whether they are susceptible to melting as a result of the heat and will this affect the ability of a person to open the door and potentially escape a fire. While this has not appeared to have been an issue up until this point in time and most of the locks appear to be code compliant, it may be worthwhile looking into this issue if the hotel is contemplating the replacement of the system.

Most of the traditional hotel door lock systems were controlled by the engineering department. They serviced the hotel locks, replaced the batteries, and in some cases interrogated the hotel locks when required. They were able to do this as the hotel door locks were primarily stand-alone devices and had limited interaction with other systems. This has all changed. Today’s RFID networkable hotel door lock systems interact with most key operational departments and are primarily the responsibility of the IT departments. The result is that the system has become much more than just a locking system, and due to the fact that it typically resides on the hotel’s administrative data network, it means that the hotel door lock system needs to adhere to the same security protocols and requirements as the rest of the applications. For this reason, many hotel door lock manufacturers request that the security team, as well as the IT and engineering departments, be involved in the selection process. The question then arises as to whether the hotels are equipped to address the change in roles, given that many hotels no longer have dedicated IT staff onsite to assist with the support of the network and system.